The Illinois Saint Andrew Society is proud to present one of the most unique and well-known festivals in the Midwest, the Annual Scottish Festival and Highland Games! The festival will be held each June at Hamilton Lakes in Itasca, Illinois. The 2020 Highland Games have been Cancelled please donate to Caledonia Senior Living

This 2-day summer celebration offers an extensive array of Scottish and festival attractions including: 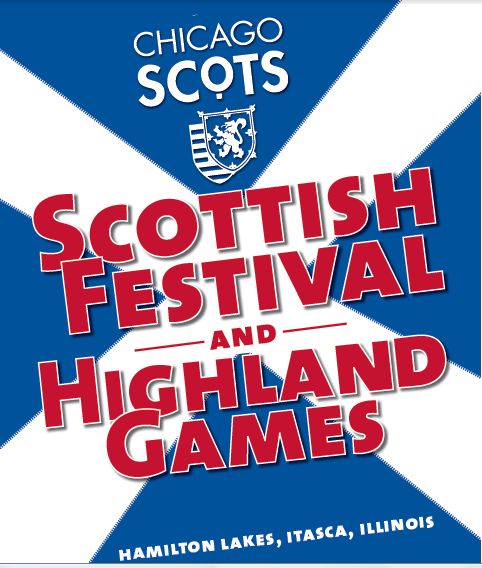 The proceeds from the festival directly support the mission of the Society and Scottish Home. By serving as a volunteer and goodwill ambassador for the Society, you are promoting Scottish culture, participating in community service and having fun. View all current volunteer opportunities.

Proceeds benefit the nonprofit Illinois St. Andrew Society, which provides elder care services at its Scottish Home in North Riverside. The organization also funds scholarships for students to study in Scotland and for local Highland musicians to record music and host competitions.
Highland Games Press Conference
On June 9, 2010, the Illinois St. Andrew Society, which hosts the Scottish Festival and Highland Games, held a press conference to announce the signing of an agreement with the Village of Itasca and Hamilton Partners to move the event to The Chancellory at Hamilton Lakes for its 25th anniversary celebration held on June 17 and 18, 2011.

Even though up to 15,000 revelers flocked to the Scottish Festival and Highland Games each year in Oak Brook, organizers thought the fest has room to grow and they announced that Itasca is just the place to do it.

Highland Games in Itasca
In 2011, the Scottish Festival and Highland Games will left its longtime home at the Oak Brook Polo Grounds and moved to Hamilton Lakes in Itasca. The site hosts many special events in the village, including Itasca's annual Fourth of July fireworks celebration that attracted over 30,000 visitors each year.

Gus Noble, president of the Illinois Saint Andrew Society, said the decision to move was not a slight on Oak Brook after 9 years together. "Our move is actually a testament to the high-quality festival we were able to grow in Oak Brook,” Noble said. "There was not a falling out ­- far from it. We simply need more room to grow. Combined with our partnerships with the Village of Itasca and Hamilton Partners and a truly magnificent setting in Hamilton Lakes we feel the Scottish Festival and Highland Games can become larger and even more successful.”

Currently the 2-day Scottish fest attracts up to 15,000 visitors and Noble said he thinks it has potential to someday become as popular as Scottish fests in California and Massachusetts that draw up to 60,000 people. "I think this has the potential to grow sizably," he said.

Itasca village officials have high hopes too. During the many planning meetings, village trustees said they anticipate the fest will generate hotel stays and business for local vendors. In 2011, they already predict at least 250 overnight hotel stays will be generated bringing needed revenue to the village.

"We're really excited and this is going to be a great event," said Village President Jeff Pruyn. "Hopefully 25 years from now we'll be up here holding a press conference celebrating the 50th year of the Scottish Festival and Highland Games happening here in Itasca."