Medinah Terrace is a 138 acre residential subdivision located in unincorporated DuPage County directly adjacent to the south and east of the Village of Itasca but within Itasca's recognized planning boundaries. The subdivision is generally bound by Medinah Rd. to the west, the Metra Milwaukee-West rail lines to the south, Hilltop Dr. to the east, and Thorndale Ave. to the north, including the residential lots that are located on the north half of Thorndale Ave. 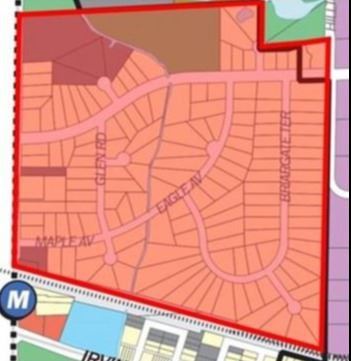 Transwestern Development Co. is proposing to acquire and assemble the entire 138 acres, including 148 residential properties, to develop the area into a Class-A industrial park in phases. The project could potentially include between 15-20 new industrial buildings and a new regional stormwater detention system. Should the developer succeed in acquiring the properties, they are seeking to annex to the Village of Itasca.

Area properties along I-390 are classified within the greater O’Hare industrial market. Industrial property vacancy in this area has been at an all-time low. This has resulted in several staff discussions on how to meet the growing demands of Itasca's existing industrial businesses. In 2018, Itasca rezoned 40+ acres at Devon and Rohlwing Road for industrial development.

Given this area's immense need for industrial space, Transwestern decided to pursue Medinah Terrace as another potential site for acquisition and industrial development. Transwestern is scheduled to present its project to Itasca’s Village Board at a Community Development Committee meeting on June 28 at 7:00 p.m. at Itasca Village Hall. At this INITIAL public meeting, Transwestern will outline its vision for the property and answer questions from the Village Board.

In early June 2022, Transwestern began reaching out to Medinah Terrace residents to discuss the proposed project with the goal of acquiring properties by Spring 2023. According to Transwestern, properties targeted for acquisition in past similar projects generally sold for double the estimated residential sales value. For example, a property whose estimated sales value was $200,000 would likely sell for around $400,000. As a result, many homeowners from previous projects were eager to sell and relocate.

Q: Has the Village of Itasca has hired Transwestern Development Co. to acquire Medinah Terrace properties?

Q: Did the Village of Itasca propose a Class A industrial park in Medinah Terrance, as part of its new redevelopment plan?

A: NO. The Village of Itasca does NOT have any Comprehensive or Strategic Plan for the Branigar’s Medinah Terrace Subdivision recommending industrial development for this area.  However, consistent with planning principles, staff has indicated that areas directly adjacent to those currently zoned (M) industrial could be proposed to be rezoned industrial (M), if annexed.

Q: Has the Village of Itasca already approved the proposed development by Transwestern Development Co. “behind closed doors” without notifying residents?

NO. Only the Village Board can approve planned developments, annexation, and rezoning requests. The Village Board has not had a single meeting to discuss this project to date. Transwestern opted to share the information on their plans with affected residents FIRST before presenting it to the Village Board.

Staff has advised Transwestern that it is required to submit a Petition for Development Review application for the proposed development once it is prepared to move forward. If such an application is filed, residents in affected areas will be notified approximately 30-days prior to the first meeting, which is held by the Plan Commission.

Residents will be given the opportunity to ask questions and state their opinions at an Itasca Plan Commission meeting. The Plan Commission will then make a recommendation for denial or approval to the Village Board. Residents will be given the same opportunity to ask questions and provide statements at the Village Board meeting.

Furthermore, because of the unique nature of this request, staff recommended, and Transwestern agreed to present its plans at an additional public meeting of Itasca’s Community Development Committee prior to submitting a Petition for Development Review. Transwestern was initially scheduled to present to the Community Development Committee on April 26, 2022. A staff memo dated April 20, 2022, outlining the proposed development, was released publicly with the agenda. However, prior to the meeting, Transwestern requested additional time to prepare its presentation; therefore, the item was removed from the agenda and tentatively rescheduled to June 28, 2022, at 7:00 pm at Itasca Village Hall. This will be a public meeting, and residents are welcome to attend.

Q: Will Medinah Terrace residents be forced to sell their properties and move?

A: NO. Transwestern Development Co. has proposed to acquire properties in a private fair market sale. The Village will not be a party or privy to terms of private sales transactions. The sale of properties is completely voluntary and is a private transaction between the property owner and Transwestern.

Q: Will the proposed development reduce tax revenue to local taxing bodies, such as the School, Fire, and Park Districts?

NO. The proposed development WILL NOT reduce tax revenue to the other taxing bodies, including but not limited to the School, Fire, and Park Districts. Regardless of annexation to the Village of Itasca, property taxes will still be assessed and collected based on each district’s tax levy.

Additionally, similarly situated projects have increased property values by approximately 86%, which results in additional revenue for taxing bodies. Below is the preliminary projection for revenue increases for the School, Park, and Fire Districts if the proposed development occurs.

Questions regarding this project can be directed to Vijay Gadde, Community Development Director at vgadde@itasca.org or (630) 228-5671.

Sign up to be notified of important updates by email or text. You must confirm your e-mail address before you receive any updates. Please check your junk or spam folder if you do not receive a confirmation email in several minutes.