Itasca - Yesterday & Today
Itasca was 1st settled by Dr. Elijah Smith in 1841. Dr. Smith practiced in Boston, and in May 1841, he set out to find a suitable site for doctoring, farming, and raising a family. He traveled from New York via Detroit and headed toward DuPage County. His parchment government land title dated March 10, 1843, was signed by John Tylor, President of the United States. The document gave Smith title to the land that is now bounded by the railroad tracks on the south, Maple Street on the west, Cherry Street on the east, and Division Street on the north.

The post office was established in 1846 and took on various names, such as Bremen, Pierce, and Sagone. In the 1860s the 1st school was built. It was a small wooden structure with 1 room. The building was located on a site near the present First Presbyterian Church.

In 1873 Smith plotted 80 acres of his land into lots. The Chicago and Pacific Railroad was completed from Chicago to Elgin, with stations at Bensenville, Wood Dale (called Lester) and Itasca. Smith gave the right-of-way to encourage location of the tracks through the settlement. He donated $400 to help build a station.

The Chicago and Pacific Railroad became "insolvent," as bankruptcy was then termed. In 1880 the road went into the hands of the Chicago, Milwaukee and St. Paul Railroad, a newly formed corporation combining several roads.

The citizens of Itasca decided in 1890 to incorporate into a village. At a meeting at his mill, A. G. Chessman was elected the 1st Village President. Irving Park Road was 1st called the Chicago and Elgin Road. At an 1891 Village Board meeting, the name was changed to Elgin Avenue.

In 1987, the Village adopted the Historic Preservation Ordinance which provides a mechanism to identify and preserve the special distinctive historic, aesthetic, architectural and / or landscaping characteristics of the Village's cultural, social, economic, political and architectural history.

Itasca Historical District
The Itasca Historical District includes the following area: Bounded on the north by North Street, on the south by Bloomingdale Road, east to Irving Park, Irving Park east to Rush Street; on the east by Cherry Street extended to Schiller Street then west to Rush Street, then south to Irving Park Road and on the west by Catalpa Avenue extended to Bloomingdale Road.
The Spire
The Spire, which is Itasca's most familiar landmark, graces the top of what was formerly the Lutheran Church of St. Luke. This edifice was erected in 1907 by builder Fred Westendorf. Pastor Frederick Zersen served the congregation for thirty-8 years. Church services were in German. It was not until 1926 that English services were held twice a month. German was also taught in the church school.

Early Banking In Itasca
Until 1916 there was no bank in Itasca. Herman H. Franzen took deposits for Village residents to the Roselle Bank each morning, making the trip regularly on the 9 a.m. train. In 1916, 2 banks opened within weeks of each other. The Itasca State Bank had as its president H. F. Lawrence. The cashier was Elmer H. Franzen. The 2nd bank was called the Dairyman's Bank of Northern Illinois, and was opened by F. N. Peck. Peck opened a total of 4 banks, but the Depression forced him to close them all. The Franzen banks in Itasca, Roselle, and Fox Lake were sound throughout the hard times of the 1920s, and emerged successfully from the Depression. 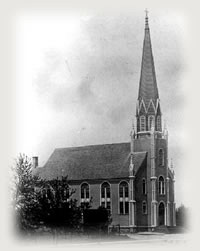 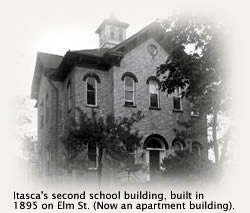 The Life of Early Residents of Itasca
Telephone service had come to Itasca in 1899. Electricity was 1st installed in some homes in 1923. The bustling community soon gained another facility. The Itasca Country Club was opened in the spring of 1925.

The rural village of the 1800s and early 1900s retained its atmosphere until the 1940s. A new word then began to enter the American vocabulary: suburb. The influence of the city increased as population increased. Commuting daily to the Loop became the routine for many of the Village wage earners. By 1982, the population had grown to 7,192. Annexations had resulted in 50 miles of Village streets, more parks, and 2 industrial areas to serve. Providing safety and service as population increased required the establishment of departments of public works, of sewer and water, of building and police. A park district, a Village library, and a fire district were formed.

Early Businesses of Itasca
Modern industry was foreign to Itasca until 1961 when Central Manufacturing District (CMD) bought about 400 acres on the western edge of the village. An industrial park was established, and such national companies as Continental Can and FMC soon moved in. In 1970, the Itasca Industrial Park was established to the east of the Village, and attracted many more industries.

Anvan Corporation built a Holiday Inn on Irving Park east of Route 53. The building was of modular construction, the 1st such hotel in the nation to be built in this manner. 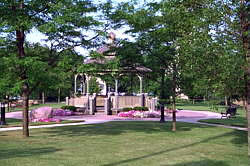 In October 1979, Trammel Crow Company of Texas broke ground for Hamilton Lakes. A 420-room Stouffer Hotel and a 10-story office building, completed in 1981, constituted the 1st phase of the project, situated on 278 acres on the northwest edge of Itasca. To date 15 buildings out of an estimated 26 have been completed, amounting to 2,767,589 gross square feet of floor space with an ultimate development of 4,490,700 gross square feet. A 16-story office building was added to the complex in 1984.
Growth of Itasca
In 1966, the Village purchased 60 acres of land south of Irving Park Road. This established a green belt area to ensure both open space and water retention. In 1968 the Spring Brook Nature Center was formed.

A Master Plan for this area was adopted in 1965, and continues to guide the community into its future. Itasca, having celebrated its 100th anniversary in 1990, continues to control its development according to the individuality of its past.

The overall growth and development of the Village has and is being controlled by the Comprehensive Plan that was 1st adopted in 1942 and has been amended in 1959, 1979, and 1993.

Outstanding residential neighborhoods, 1st-rate schools, and beautiful parks distinguish Itasca as a quality community. Most importantly, we have worked to retain our small town charm with a lovely historic district and churches of all architectural styles. 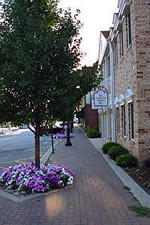