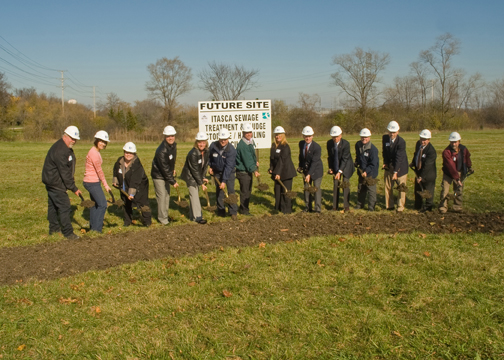 The Village of Itasca broke ground on the new Public Works and Wastewater Treatment Plant, November 2, 2009.

The current plant is located on Schiller Street, just west of Prospect Avenue. Once the new plant has been relocated and is up and running, the existing plant will be demolished. There will still be a pump building at that location, to receive the incoming waste water. Two underground pipes will be used to get the waste water from the pump station to the new plant. These pipes are going to be installed by horizontal directional drilling, so that no construction will have to cross Prospect Avenue.

The type of treatment that is going to be used at this plant is different than the current system. Large tanks called Sequencing Batch Reactors are the first and most important step to treat the waste water that comes through the plant. The solids and the water are separated; the water gets cleaned and disinfected and discharged to Salt Creek, and the solids get treated in a Sludge Building for land application (fertilizer!).

By using this type of treatment system, the footprint of the overall plant is much smaller than the existing plant.

The project also includes improvements to the current Public Works facilities, as well as the addition of a salt storage dome and a police storage area. This work has begun and will be completed well before the completion date of the plant.

Construction began in late December. The entire area of the Sludge Building has been excavated. The concrete base has been poured and some parts of the walls are done as well. Half of the Sequencing Batch Reactors has been excavated and the contractor is getting ready to pour the concrete base. These structures take so much concrete that they have to be done in sections.

The construction project will create over 1,200 jobs and is expected to take 2 years to complete. Operation of the new plant is slated to begin in 2011.

The project is funded by the Illinois Environmental Protection Agency Pollution Control Loan Program, the American Recovery and reinvestment Act (ARRA) Program, and the issuance of bonds under the Buy America Program.

Itasca will borrow $20 million from the IEPA programs. Under the term of the AARA program $5 million of the $20 million debt will be forgiven, leaving a $15 million dollar obligation to be paid back at 0% interest over twenty years.

The progress of this project will be followed on this section of the website so please feel free to monitor the construction.